Tap and die sets can be an excellent investment for anyone who often works with difficult screws or that needs to have the ability to make their own.

The best tap and die sets include multiple sizes of taps and die, and the equipment necessary to use them, such as ratchets and T-handles. Some kits offer both metric and SAE sizes, while other kits may only have one or the other. And the best kits come in a handy case that keeps your tools organized.

In this article, we’re going to discuss the best tap and die sets. We’ll also provide a handy buyer’s guide to help you figure out what you should look for in your tap and die set.

In this section, we’re going to discuss the best tap and die sets. Afterward, we’ll discuss what taps and dies are and provide you with a resourceful buyer’s guide. 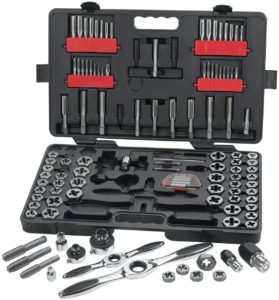 No matter what size screw you need to cut or create, you’ll have the proper size with this set, including both metric and SAE size die and taps made of carbon steel. You also get both plug and taper taps, so you’re set for any project.

This kit comes with two different sized T wrenches, with a five-degree ratcheting arc and reverse lever, which means you don’t have to deal with a hand over hand turning. Your job gets done faster and with less exertion.

Safety features like a twist-lock guide system, which reduces walk-back of the die and keeps it centered during cutting, means you don’t suffer any severe accidents. And an auto-lock feature makes it safer to remove the tap adapters.

The included extensions help reach those problem areas where your hand won’t get. And the adapters make it easy to work with round or hex shaped dies.

Everything is safe and organized inside the plastic blow mold case in red and black colors. The tap holders have a convenient tilt to make it easier to get your tools out of the slots. However, many people feel the case is too weak to protect your equipment or carry around properly.

Another kickass tap and die set to consider is the Irwin Tools 117 piece tap and die set. This kit offers various tools for mechanical and auto repair work, without much use for gear in your toolbox.

This kit comes with ten carbon steel, standard measurement taps, and dies in sizes ¼” 20 NC up to ½” 20 NF. And it has sixteen metric sizes from 3mm up to 12mm. There are also six machine screw taps and dies, and two pipe taps and dies. Plus, two die stocks.

You also get two T-handle tap wrenches (one adjustable), one two-in-one tap wrench, and a screwdriver. And let’s not forget the handy 36 piece drill bit set, which means one less tool you have to track down in your garage.

All of your gear stores in an organized, blue durable plastic case, saving you time from having to hunt your parts down.

Some people may not need one of the larger sets, so we’re going to turn our attention to the Efficere Master Tap and Die Set, which only has sixty pieces of GCr15 bearing steel.

Whether you’re working on a vehicle, metal fabrication, plumbing, or other industries, this tap and die set will be useful for you. It can work on carbon steel, copper, aluminum, brass, and stainless steel.

This set includes both standard and metric-sized taps and dies, with a tapered design that gives you control over your threads’ deepness and prevents over threading.

The cutting teeth were made using CNC (computer numerical controlled) equipment for precise measurements. And all equipment is treated with heat to 60 HRC Rockwell hardness.

The Neiko 00916A tap and die kit is the perfect set for beginners who don’t need all the larger sets’ extra equipment. The Neiko comes with the most common equipment you’d need to create new screws or rethread old ones.

However, the metal used for this set is not carbon. Therefore you may face trouble cutting hard objects such as steel. It works excellent for softer materials like aluminum.

There’s also a -handle tap wrench, adjustable die wrench, a T-handle tap wrench, screwdriver, and thread pitch gauge included, with molded sections to hold each piece in the gray, plastic case. Many customers say the products in the top half (all the taps) fall out when you close the lid.

Tap and die sets save you the headache of fighting with seized bolts. You can use these tools to cut the screw loose and move on to the next step in your project.

But you can also use tap and die sets to make your own screws (threading). The tap cuts threads on the inside of a hole to form nuts. On the other hand, a die will cut externally to create a male piece with threads (a bolt).

When you use the tap to cut threads on your screws, you are tapping. If you are using the die, it’s threading.

Tap and die sets can also clean the threads of your screws, called chasing. However, be aware that using a standard die or tap can cause weaker threads. It’s best to use chasers, which are softer material that doesn’t cut the threads.

As you can see, a tap and die set is an essential piece of equipment, especially for mechanists or hobbyists who work with screws a lot.

What to Look For in a Tap and Die Set

Trying to buy a tap and die set can be challenging if you don’t know what you should look for in your set. We’ve put together this handy buyer’s guide to give you an idea of what to consider in a tap and die set.

The type of material a manufacturer uses to make your tap and dies should be your most significant consideration. You don’t want to spend a bunch of money on a set that breaks within the first few uses.

The type of metal of your set will also determine what type of materials you can work on, such as steel or aluminum.

The best choice is to find a tap and dies made of carbon or high-carbon steel. This type of steel is the strongest and will last you longer. It also lets you tackle different kinds of materials.

Alloy metal is another common material to use for taps and dies. These tools are cheaper but don’t last as long as steel products. And you’re limited on what you can cut. Alloy is usually better for softer materials like aluminum but may break cutting steel.

The best thing about buying a set is that you get multiple tools for one price. You may be eyeing an extensive collection with plenty of pieces, thinking it’s a good buy.

While we encourage you to consider sets over buying individual parts (cheaper and easier), we also advise you to pay attention to the product descriptions before making your choice.

An extensive set can mean more parts, but it can also mean cheaper materials. If you’re comparing two different kits, and one has more pieces but is cheaper, it’s probably not going to be as reliable and durable.

Look for sets that include the tools you’ll need for your tap and die set, such as ratchets. But be aware that some large piece sets have unnecessary tools, such as screwdrivers, to drive up the pieces’ number.

You may find yourself with many tools you don’t use, and not enough of the ones you need. Avoid part-count inflation by reading the product reviews and selecting a kit with the essential tools you need.

There are three common types of taps you can use, depending on your project. But many sets do not come with all three. You may have to buy separate pieces to get what you need if you don’t pay attention to what set you buy.

Starter taps also referred to as taper taps, have small flat threads at the top that let you create a blind hole to start your threads. These taps need the least effort to use.

It cuts a complete thread, and you won’t need other taps if your material is thin. They have between eight to ten threads. This is the most common tap included in sets.

Plug taps have slight tapering at the tip, making them easier to start than a bottom tap, which we’ll discuss momentarily. Some people refer to plug taps as second taps.

You can use these taps to start your hole. Or use them to finish tapping a hole in a thick object that a taper tap couldn’t reach. Plug taps usually have three to five tapered threads.

Bottom taps are not tapered, so it’s perfect for making full threads to the bottom of a blind hole. These types of taps will have no more than 1 to 1.5 tapered threads.

These taps are used when you want to thread to the bottom of your material. Many people prefer to use a taper tap to start your hole and finish with the bottom tap.

What does TPI mean?

TPI stands for threads per inch and measures the threads on an inch diameter.

How to determine tap size?

The tap diameter will be equal to the standard width but minus the thread pitch.

What is a hex die?

Tap and die sets are a useful piece of equipment that can save you time and effort when dealing with broken or damaged screws. You can use tap and die sets to cut broken screws, clean the threads off used screws, or create your own. We’ve given you the best tap and die sets, including multiple sizes taps, and screws, plus the equipment needed to use your taps and dies. Happy threading!