If you’re like me you hate dealing with wires,  no matter how good the tool is.  They can get tangled, stretch, and in my opinion just be inconvenient to deal with overall. That includes corded angle grinders.

Angle grinders are dangerous enough as it is, so you shouldn’t have to make it even more dangerous with the wire flopping all over the place. Sure you’ll have to deal with charging the battery  and replacing it after a few years, but that might be worth it depending on your situation. 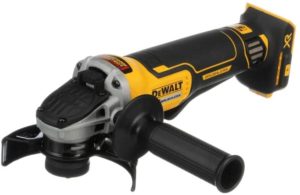 With most tools, I typically recommend name brand products over lesser known brands as they tend to be higher quality. The Dewalt DCG413B cordless angle driver is no different.

You have two options when purchasing.  You can either buy the tool by itself or you can  buy the starter kit, which also includes the battery and the charger. If this is your first angle grinder, make your life easier by getting the starter kit.

This is a four and a half inch angle grinder, which is perfect for your typical home Improvement projects.  The tool is very comfortable to use and has a rubber handle on the side that’s ergonomic. It also uses a brushless motor, is very portable, And comes with dewalt’s standard 3 year limited warranty. The maximum speed Of the blade is about 9000 RPM, which I can say from experience is pretty good as I didn’t have to deal with any bogging down of the blade.

One suggestion I have is that if you can, get at least a 5ah battery or more for, as the 2ah will give you less than 10 minutes of constant use. Overall a very good cordless angle grinder, which is why I put it at the top of the list. 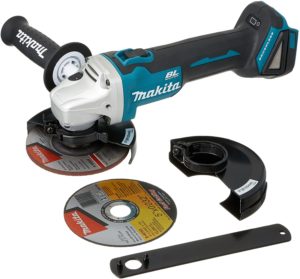 Makita is another brand I’m a fan of as I’ve only had good experiences with their products. they’re cordless angle grinder is similar to DeWalt, in the sense that the angle grinder can be purchased on its own or in a pack that includes the charger and the battery.

The features this angle grinder comes with is nice, such as the Electric brake, which  ensures the blade stops running quickly after it is turned off, and the anti-kickback feature.  something to note as well is that these are newer features that did not exist in some of the older Makita models.

Something that is important to notice that there is no paddle for variable switch control As it does not have a variable speed. In terms of RPM the Makita is slightly under the DeWalt at 8500 RPM.  overall another solid choice for those looking for a quality cordless angle grinder. 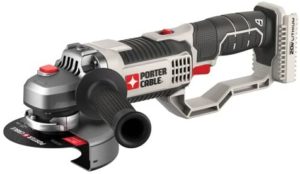 In my opinion,  Porter Cable it’s one of those lesser popular brands in the Home Improvement niche, But they do have some products that are fairly solid. I like their cordless angle grinder  as it’s not too expensive for those strapped for cash, while still being able to make some quality cuts, finishes, and removals.

Per usual you have the option of buying the standalone which does not include a battery or charger, or you can get the whole set.  if you’re looking to upgrade the battery obviously you don’t need to get the holset but something to keep in mind. The RPM matches that of the Makita at 8500 RPM. One of the potential downsides of this angle grinder is that the brush if damaged cannot be replaced, which might explain the cheaper price. By the way this is a good choice for those that won’t be using the angle grinder often and just needed occasionally for projects. 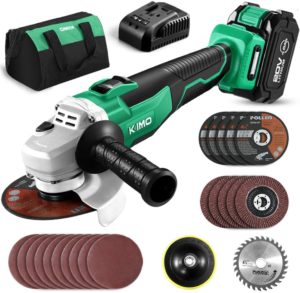 The KIMO In my opinion choice for those who care most about value.  Hear me out for one sec. KIMO is one of the brands I have never heard of, and so I was hesitant on even considering suggesting their angle grinder as one to get. However,  it ended up being a pleasant surprise for me.

I say that because of the fact that you get a battery, charger, and cordless angle grinder for the same price as the Dewalt angle grinder, which does not come with the battery or charger unless you pay extra. Not only that, the grinder is quite the little beast. The rotary hammer uses a 4.0 Ah battery and lasts for quite a bit of time. The switch is easy to use, and the grinder has an electricity brake function that allows it to stop the blade quickly. When you get all that for the cost, it’s hard to pass up that deal, even if it’s from a lesser known brand.